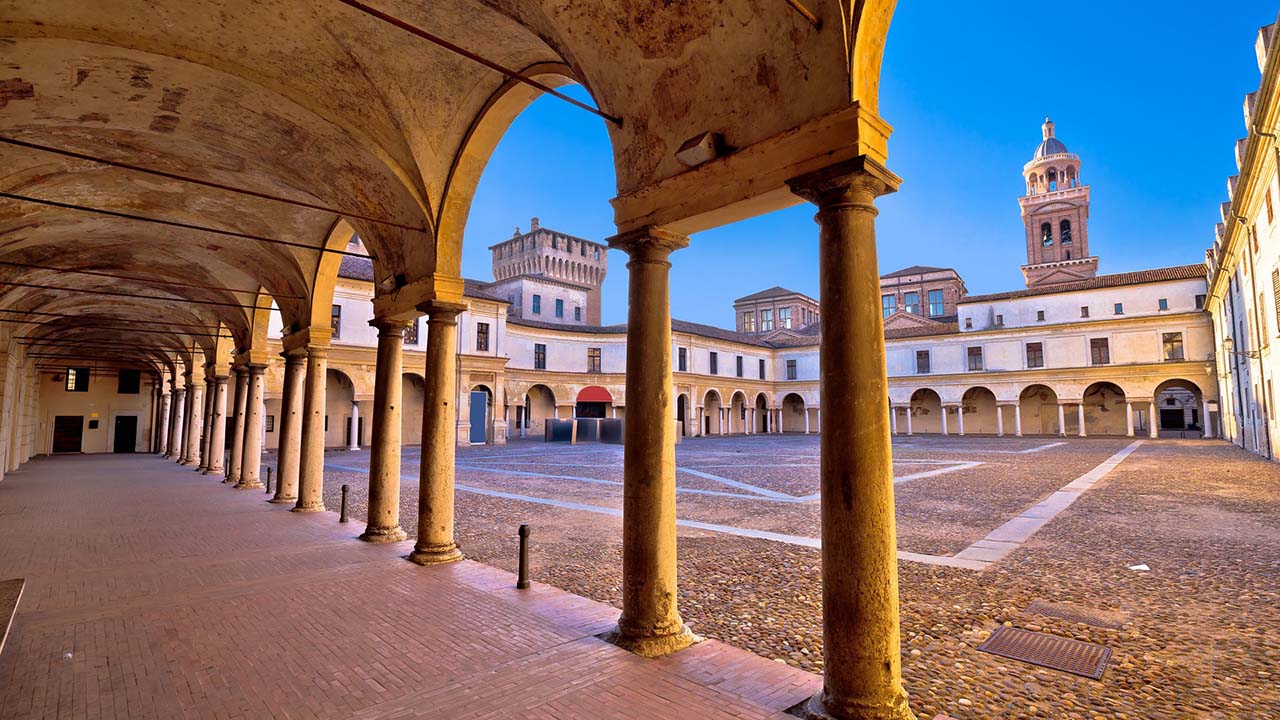 Mantua, the hometown of the poet Virgil, is a city of water, surrounded by three lakes formed by the River Mincio. It took on its current appearance between the 15th and 17th centuries, when the Gonzaga – an enlightened dynasty – made profound changes to the urban framework of the city, transforming it into a fully fledged work of art.

Elegant palazzos, stunning squares, marvellous frescoed rooms and works of art by some of the leading artists of the time can be admired on foot by strolling around the alleys and cobblestone squares, as you discover one of the most prosperous eras in Italian – and European – culture.

The squares of Mantua: relics of the Renaissance

The historic centre of Mantua is composed of the Palazzo Ducale, the imposing royal residence that dominates Piazza Sordello, the heart of religious and political life in the city. Alongside the Castello di San Giorgio, which was built in the 14th century and features 950 rooms, gardens, towers, roads, courtyards and loggias, the Palazzo Ducale is one of the largest complexes of its kind in Europe. It’s also home to a masterpiece by Andrea Mantegna, the celebrated Camera degli Sposi (Camera Picta) fresco.

In addition to Piazza Sordello, which is also home to the cathedral and the Palazzo Vescovile, Mantua is home to several other beautiful, solemn squares. The stunning Piazza delle Erbe is dominated by the Palazzo delle Ragione, featuring various architectural elements typical of the time (exposed stone, battlements, large windows) and the 15th-century Torre dell’Orologio, whose complex mechanism still does a fine job to this day. Situated between Piazza delle Erbe and Piazza Sordello is Piazza Broletto, surrounded by buildings dating back to Mantua’s period as a city-state, such as the Palazzo del Podestà, which includes a 13th-century statue named Virgilio in cattedra, and the Torre Comunale on the right. Also worth visiting is Piazza Mantegna, with the Basilica di Sant’Andrea, a masterpiece by Leon Battista Alberti.

Finally, the east of the city is home to two further buildings of significance: the grandiose Palazzo Te, which was built and adorned with frescoes by Giulio Romano (in 1525 and 1535), who devised it as a haven of leisure and a venue for the parties of Federico II Gonzaga, Duke of Mantua, and Palazzo San Sebastiano, now home to the city’s museum.

No man can live off art alone, however. Thankfully, as well as being jewels in Italy’s Renaissance crown, Mantua and Sabbioneta also occupy important places in the gastronomic make-up of the local area and its peasant traditions, with some delicacies dating back to the time of the Gonzaga.

The real stars of the local cuisine are the first courses and desserts. Take risotto alla pilota, for example, finished with salamella sausage and Grana Padano, or the various types of tortelli pasta (particularly those stuffed with squash), agnolini (meat ravioli) in chicken broth and sbrisolona, a crumbly tart made from almonds and the city’s most distinctive creation.

The province of Mantua is unique in Italy in that it produces both Parmigiano Reggiano and Grana Padano, so don’t miss out on a taste of both, accompanied by the local mostarde (preserved fruit), particularly the Campanino apple variety, a recipe dreamt up by one of the Gonzaga’s cooks.

And if you fancy a nice glass of wine, we recommend a Lambrusco Mantovano D.O.C., a Garda Colli Mantovani D.O.C. or an Alto Mincio I.G.P.

Protected by its ancient city walls, which are still in good condition to this day, the town of Sabbioneta is home to some wonderful examples of late-Renaissance architecture and painting. It was built in the second half of the 15th century, designed by Vespasiano Gonzaga, the patron of the city. A military man but also a lover of literature, architecture and the classics, he radically transformed Sabbioneta into a "little Athens", using it as a sophisticated architectural experiment inspired by classic principles and based on the concept of the "ideal city".

With the help of expert military theorists, engineers and architects, Vespasiano devised and created an urban complex which celebrates the elegant balance between art and architecture. Thanks in part to the fact that the town has barely changed since then, Sabbioneta has the feel of a place caught in time, where everything seems orderly and made to measure for its residents. As you walk through its network of streets, the sense of balance and harmony which Vespasiano so desperately craved is clear to see.

The political and religious centre of Sabbioneta was always Piazza Ducale, which is dominated by Palazzo Ducale, now the home to the Civic Museum. Over in Piazza d’Armi, meanwhile, is Palazzo Giardino (1578-88), an understated frescoed building created as a place for Vespasiano to enjoy himself, complete with a beautiful Italian-style garden with fountains, water features and pergolas. The Palazzo leads to the Galleria degli Antichi (1584-86), a long corridor adorned with decorations and built to host Vespasiano’s collection of marble (now located in the Palazzo Ducale in Mantua).

The jewel in the Sabbioneta crown is the Teatro all'Antica, also known as the Teatro Olimpico (1588-90). It was the first theatre in Italy to be designed from scratch. The building – which draws inspiration from classic art and architecture – features a number of nods to ancient Rome, from the words “Roma quanta fuit ipsa ruina docet” (“The greatness of Rome can be seen in its ruins”) on the façade to the seven Roman emperors depicted in the loggia.

Finally, for anyone wishing to expand their knowledge of the genial, enlightened Vespasiano, Piazza dei Servi is home to the Chiesa dell'Incoronata, whose octagonal shape is inspired by the architecture of Bramante. It silently stands watch over Vespasiano’s tomb, made from rare, multi-coloured marble and centred around a bronze statue of Sabbioneta’s founding father himself.